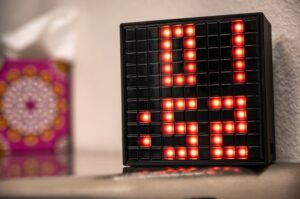 The rule of 52 and 17 is a variation to the Pomodoro technique. It’s similar in that you work for a specified amount of time before taking a break for a certain number of minutes. The only real difference is the length of your work sessions and breaks. With the 52/17 method, you work for 52 minutes before taking a 17-minute break. Like the Pomodoro method, the regular breaks increase your productivity by giving your brain the rest it needs between bursts of work.

Why Would You Use It?

If you are already using a short burst work method, 52 minutes of working may seem like a long time without a break. And it is. The problem is that many work tasks take longer than the Pomodoro Method’s 25-minute blocks. Also, a timer going off every 25 minutes might break you out of any flow state you have been able to achieve. On top of that, a longer 17-minute break allows you to disengage from your work more effectively. It is enough time to grab a quick bite to refuel your energy or even take a brisk walk to get your creative juices flowing again.

Absolutely! The rule of 52 and 17 has been proven widely effective in several workplaces all over the world! The creators of the 52/17 method based it on their employee-tracking software that thousands of companies worldwide have used. Their data showed that employees who took regular, effective breaks were more productive than working for multiple hours with only a lunch break. The employees tend to work with more dedication during the 52-minute work stretch because they know the 17-minute break is coming.

In conclusion, the rule of 52 and 17 is another short burst work method employed in the workplace to increase productivity. This rule can work best in spaces where the Pomodoro technique is too short, and times of focus beyond 25 minutes are required.  You can learn to boost your productivity and improve your life… 25 minutes at a time.

No matter what you want to accomplish, the rule of 52 and 17 can be applied in your life to increase productivity while giving the brain the rest it needs.

This very informative video on Youtube titled: The 52/17 productivity rule UPDATED (it’s all different now!) caught my attention.   Seven years ago, DeskTime conducted a productivity study that found the rule of 52 and 17  work/break rule.  It went VIRAL!   They decided to repeat the productivity research and see how the most productive people’s work time/break time ratio has changed by now.  What they found was very disturbing …. In my opinion.

If you prefer to read, I’ve included a transcript of the entire video, kindly provided by Google and Youtube. You can quickly skim through the main points of the video’s content if that is your preference.

VIDEO TRANSCRIPT:  Chances are you’ve heard of the 5217 productivity rule. Well that was seven years ago we’ve updated and rerun the entire experiment and we have new findings. Spoilers it’s totally different now.

This research went viral. It was covered in all the major news outlets. It was on tv, on the radio; people have even made apps dedicated to it.

But that was seven years ago and we were curious about how and if it has changed so we decided to completely re-run the same study.

We isolated the top 10 percent of the most productive people using death time which is about 350,000 people all together and we isolated and identified their working behaviors and the results couldn’t be more different.

Drumroll… the new results are that people now work on average of 112 minutes and break on average for 26 minutes. That’s nearly double in some cases and even more in others.

Just a quick break just reminding you to subscribe for more studies and original data like this. All right back to the video.

So we see that people are working significantly longer sprints of time, and also taking somewhat longer breaks. So what’s going on here?

Well we have had a lot of time since the last study and we’ve also had an entire pandemic in between, so chances are this has kind of mixed things up.

From one side we’re seeing people spend a lot more time at the computer. People are working longer hours to compensate for the fact that they’re not commuting anymore. And just in general, are finding it more difficult to draw the line at the end of the workday. So that explains the longer hours.

We also spoke to psychologist uh Katrina Urschleya on why we’re seeing these results and her findings were that she’s seeing that people are spending more time in meetings than ever before.

Now that people are remotely working they’re having a lot more meetings to kind of stay on top of tasks and and stuff that they’re doing together so those meetings that used to happen away from the computer and face to face are now happening in the computer.

So already, that contributes to a longer kind of screen time. At the same time, she also says that now breaks are turning into just more work. People are taking their time away from the computer to make lunch for the family, to help with kids school work, to put a laundry load in, and so the breaks are turning into more work rather than less work. So this is completely changing the dynamic of working and breaking.

So what we did is we also repeated the exact same research and pulled out the data for February of 2020 when the majority of the world was still working regularly as they had been before and there we had different findings.

Those findings were that people were working on average for 80 minutes sprints and braking for 17 minutes, so we’re still seeing the same amount or length of break time but already seeing a longer amount of the work sprint time. So 80 minutes being an hour and 20 minutes all in all, we are seeing a tendency for people to work longer hours, take longer breaks and it has really accelerated during this time of pandemic.

So what do you think? Is this kind of more in line with how you’ve been working lately? Please comment below and subscribe for more in-depth productivity studies you.

Learn to boost your productivity … 25 minutes at a time.

This site uses Akismet to reduce spam. Learn how your comment data is processed.

How To Gain Control Of Your Free Time

Like most people, we’ve struggled over the years to be effective and productive.

When we found an incredibly simple technique that boosted our productivity, we knew we had to share it with as many people as possible.